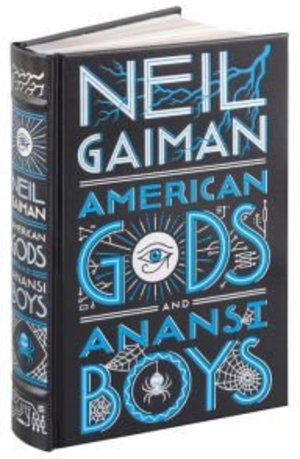 Neil Gaiman
Neil Gaiman's entertaining blends of light and dark fantasy have earned him legions of readers, and renown as one of the most talented writers working in contemporary fantastic fiction. This volume brings together two of his best-loved novels. American Gods is the story of Shadow, an ex-con and drifter who finds himself a pawn between the gods of antiquity and avatars of contemporary America's faith in indusry, wealth, and celebrity. Anansi Boys tells of Fat Charlie Nancy and Spider, the children of a modern incarnation of the trickster god, Anansi, and their comic competition as the divinely endowed Spider attempts to one-up Charlie in virtually every aspect of his life. Full of humor and pathos, these two novels represent modern fantasy fiction at its finest. American Gods/Anansi boys is one of Barnes & Noble's Collectible Editions classics. Each volume features authoritative texts by tthe world's greatest authors in exquisitely designed bonded leather bindings, with distinctive gilt edging and an attractive silk-ribbon bookmark. Decorative, durable, and collectible, these books offer hours of pleasure to readers young and old and are an indispensible cornerstone for every home library. Editorial Reviews: This gorgeous leather-bound hardcover edition would be an attractive addition to any fantasy or literature library, but its arrival could not be more timely: This summer we are celebrating the 10th anniversary of Neil Gaiman's Hugo and Nebula Award-winning American Gods, universally acclaimed as a genre masterpiece. This sturdy, handsome volume also contains Gaiman's Anansi Boys, which features one of the most famous openings in modern fiction: "It begins, as most things begin with a song. In the beginning, after all, were the words, and they came with a tune. That was how the world was made, how the void was divided, how the lands and the stars and the dreams and the little gods and the animals, how all of them came into the world. They were sung."