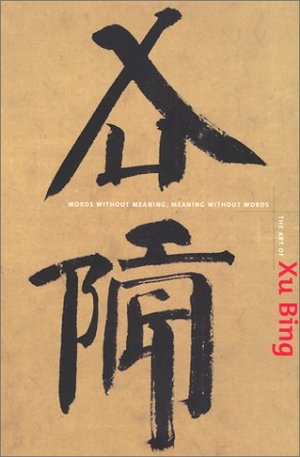 Britta Erickson
Xu Bing (born 1955) stands out as a leading figure in the international art world. His works and installation pieces, including Ghosts Pounding the Wall (an acutal rubbing of the Great Wall done at Jinshanling in 1990) and Wu Street (1993), and his ongiong exploration of language have brought worldwide attention to this unassuming provocateur. As a teenager in China during its Cultural Revolution, Xu Bing experienced the emotional and social upheavals that marked this tumultuous time. He was removed from his "reactionary" parents in Beijing and sent to the provinces to work in a small farming commune as part of Mao Zedong's "rustication" program in 1974. His forced participation in the revolution led him to question and re-examine all he had known, from the meaning and appearance of Chinese characters to the purpose of the Great Wall of China and the value of art and culture. An accomplished calligrapher, printmaker, and art teacher, Xu Bing turned his simultaneous interest in and mistrust of language into an extended examination of Chinese characters. The result was the Book from the Sky, a powerful installation of books, scrolls, and panels for which Xu Bing invented hundreds of new characters in the late 1980s. This uneasy play between the familiar and the unknown-these words without meaning-caused an uproar in Beijing art community and led the Chinese government to censor Xu Bing and his art. The artist emigrated to the United States in 1990. Featuring works in Square Word Calligraphy, his whimsical, invented language, The Art of Xu Bing traces the calligrapher's career and provides illustrations and in-depth descriptions of his works, which have been shown from Finland to Australia and the United States. Author and art historian Britta Erickson leads his insightful look at Xu Bing's development as a significant artist, and Xu Bing himself contributes a fascinating chapter on his life and work.