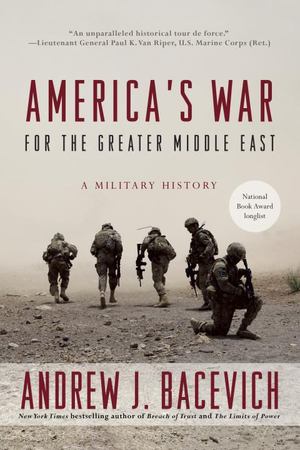 Andrew J. Bacevich
A searing reassessment of America's foreign policy in the Middle East over the past four decades--by a retired Army Colonel and New York Times-bestselling author. From the end of World War II to 1980, virtually no American soldiers were killed in action while serving in the Greater Middle East. Since 1990, virtually no American soldiers have been killed in action anywhere else outside the "open-ended war" in the Greater Middle East. Bacevich weaves an interconnected narrative out of episodes as varied as the Beirut Bombing of 1983, the notorious Mogadishu firefight of 1993, the invasion of Iraq in 2003, and the rise of ISIS in 2014 and America's ongoing response. Understanding what these costly exertions have wrought requires seeing them as parts of a single war. Bacevich connects the dots in a way no other historian has done before, in a concise political and military history.This book will change how we view America's engagements in the Middle East, and it will influence policy makers and opinion-makers.