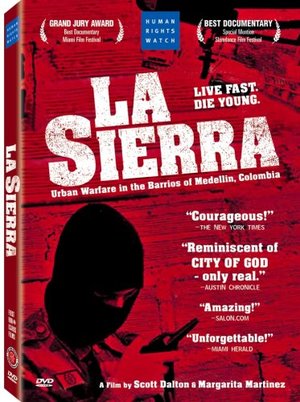 Margarita Martinez, Scott Dalton (II)
{Award of Excellence -- Society for Visual Anthropology 2006 }{Grand Jury Award, Best Documentary -- Miami Film Festival 2005}{Special Mention, Best Documentary -- Slamdance Film Festival 2005 }{Best Documentary-- IFP Market 2004 }La Sierra is a barrio in Medellin, Colombia-- the cocaine capital of the world. Here, lives are defined by drugs, guns and violence. A state of perpetual urban warfare exists, with paramilitary gangs, leftist guerrillas and the US-sponsored Colombian military battling continually for power and control. The award-winning documentary LA SIERRA explores life in the barrio over the course of one year through the prism of three young lives.Edison, aka "The Doll," is a paramilitary commander in La Sierra. At the age of 22, he is the de facto mayor of the neighborhood and father to six children by six different women. Though openly dedicated to and excited by his life of violence, Edison is an intelligent and charismatic young man. As we follow him through the conflict, its victories and setbacks, he shares his dreams for himself and his children and explains his attachment to what he calls "my war."Cielo, age 17, was displaced from the countryside as a young child when her brother and father were murdered by guerillas. A mother at the age of 15, she was widowed when the father of her son (a gang member) was killed. Now Cielo is devoted to a new boyfriend, a paramilitary, who she visits in jail every Sunday. Jesus, 19, is a mid-level paramilitary member. Badly wounded when a homemade grenade blew up in his hands and face, Jesus presents himself as ready for death at any moment, regularly indulging in marijuana and cocaine. LA SIERRA is an intimate, unflinching portrait of three lives defined by violence and a community wracked by conflict. Over the course of a year these lives, and the life of the barrio itself, undergo profound changes, experiencing victory, defeat, hope, despair, love and death. Entering a world where few journalists dare to venture, filmmakers Scott Dalton and Margarita Martinez reveal not only startling moments of violence and its aftermath, but also those of tenderness and faith that give the community hope for survival.