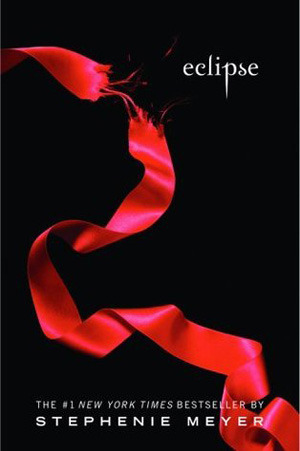 Stephenie Meyer
Readers captivated by Twilight and New Moon will eagerly devour Eclipse, the much anticipated third book in Stephenie Meyer's riveting vampire love saga. As Seattle is ravaged by a string of mysterious killings and a malicious vampire continues her quest for revenge, Bella once again finds herself surrounded by danger. In the midst of it all, she is forced to choose between her love for Edward and her friendship with Jacob --- knowing that her decision has the potential to ignite the ageless struggle between vampire and werewolf. With her graduation quickly approaching, Bella has one more decision to make: life or death. But which is which?

@jotaikodragon
Reviewed: 2021-04-14
Oh, what a brilliant guilty pleasure. I enjoy losing myself in these books.
@mella87
Reviewed: 2021-03-06
Probably the best book in the Twilight Saga. Still can’t stand Bella but I do enjoy how the book is written. When you read it, you feel Bella’s emotions so to me, that is well written.
@fromelliott
Reviewed: 2017-05-28
I was actually reluctant to continue with this series. New Moon was an emotional nightmare ridden with drama!, angst, and Bella vegging out mentally because the love of her life pulled a Peter Parker on her; I was fostering a mild love/hate relationship with both Bella and Edward by the end of Books 2 (complete with eye rolls aplenty -- is that being too callous?), which made me question my determination to, as always, see a series through to the end.

But curiosity overrode my distaste, and I'm glad it did. While [b:New Moon|49041|New Moon (Twilight, #2)|Stephenie Meyer|https://d202m5krfqbpi5.cloudfront.net/books/1361039440s/49041.jpg|3203964] was not exactly my favorite book, after reading Eclipse, I understand why things had to be as they were: the blunders and emotionally-driven recklessness set the stage for further character growth and maturation. While the drama continues in this book (Bella officially completes a love triangle with her realization of her affections for Jacob in addition to those she has for Edward), we see Bella become more mature as she wrestles with and realizes the increasingly difficult and complicated decision of whether or not to become a vampire, a decision that looms before her inevitably like a coming storm; she also decides to see through her responsibilities for the sake of her family and friends. THANK GOODNESS, because that means Bella lets Alice plan a traditional wedding in lieu of the quick gig that Bella wanted in a Vegas love chapel. Needless to say, I'm totally excited about the upcoming nuptials, although I feel horrible for Jacob post-epilogue. But in situations like that, what can you do, right? It was her choice, and she chose Edward.

I also want to say that I'm happy to see that Stephenie Meyer's writing skills are improving. It's definitely more solid now, as opposed to being a wee shaky, with the bits of awkward prose that we find in the first two books; and we see her developing a better grasp on handling bittersweetness -- so key to the series, I think.

All in all, to conclude this rather long review, I was more or less satisfied with the book upon my reading it. Yeah, the Edward-Victoria showdown was a bit of a letdown (seriously, it totally sucks not having vampire vision in situations like that), and I'm surprised that Bella is not a vampire yet (the Volturi won't be pleased). But Eclipse won me back into the Twilight universe, and I'm eagerly awaiting [b:Breaking Dawn|1162543|Breaking Dawn (Twilight, #4)|Stephenie Meyer|https://d202m5krfqbpi5.cloudfront.net/books/1361039438s/1162543.jpg|2960529], which should be coming out later this year?
@nataliedome
Reviewed: 2016-01-16
As Seattle is ravaged by a string of mysterious killings and a malicious vampire continues her quest for revenge, Bella once again finds herself surrounded by danger. In the midst of it all, she is forced to choose between her love for Edward and her friendship with Jacob - knowing that her decision has the potential to ignite the ageless struggle between vampire and werewolf. With her graduation quickly approaching, Bella has one more decision to make: life or death. But which is which?
@aliciashani
Reviewed: 2009-07-01
Wow- I think this is one of the worst books I’ve ever read. I had to fight the urge to throw it across the room, because at 500+ pages, it would definitely do some damage. Where do I start? Bella is the most annoying twit of a person in this book. Her obsession with Edward is ridiculous at this point and I wanted to slap her and Charlie. I understand teenage angst and that everything feels so much stronger at 17, but for the love G-d, this was way over the top. They don’t have a relationship, there was no development of anything resembling a relationship- it was more of an idolization of Edward and for a reason I still don’t get. So what he’s good looking and rich- I could understand if Meyer left it at that, but it tried to make it so much more.
Then there were the constant references to his “rock hard chest” and his nighttime visits were not lovely or cute- but annoying and scary. His control issues in the book were ridiculous and if this were a real life friend- I’d tell her to leave now. I mean her having to sneak away from him was just not cute. I think what bothers me most is that young women will idealize some form of an Edward and his character and their relationship is so far from accurate, realistic and even healthy.