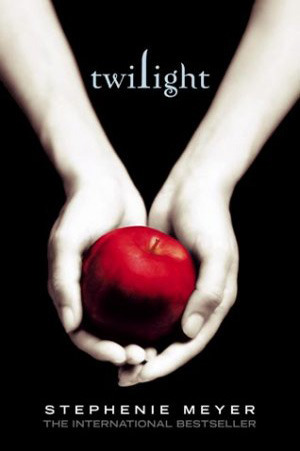 Stephenie Meyer
Isabella Swan's move to Forks, a small, perpetually rainy town in Washington, could have been the most boring move she ever made. But once she meets the mysterious and alluring Edward Cullen, Isabella's life takes a thrilling and terrifying turn. Up until now, Edward has managed to keep his vampire identity a secret in the small community he lives in, but now nobody is safe, especially Isabella, the person Edward holds most dear. The lovers find themselves balanced precariously on the point of a knife-between desire and danger.Deeply romantic and extraordinarily suspenseful, Twilight captures the struggle between defying our instincts and satisfying our desires. This is a love story with bite.

@jotaikodragon
Reviewed: 2021-04-14
While not being about a complicated subject, the emotions about the subject are and I found myself drawn into the world of Bella and Edward so very easily. When that happens, I know that I am enjoying a book. I'd definitely recommend it. I plan to buy the next books in this series for sure. Very easy to read, easy to get emotionally entangled in the story.
@kirbyb
Reviewed: 2021-02-04
3.60
@zairhazerdane1
Reviewed: 2020-02-10
Great. Entertaining! There are glaring flaws but very entertaining nonetheless
@inuvantem
Reviewed: 2019-02-06
review of entire series
I read this series about 5-6 six years ago all in one week and I fell in love with it (though I wasn't a fan of the 4th book). I think I read it in total about 4-5 times before moving on because it somehow lost it's appeal for a while. I fell in love with Edward and Bella and the whole story surrounding it. I thought it was so romantic.

However, I decided to reread them again about 6 months ago and boy was I in for a suprise.

I found that I didn't really like it anymore. The story was ok, but I found that the critique that first annoyed me, now made a lot of sense. I think it portraits a very bad relationship and is on the obsessive/compulsive/abusive side. I don't like that Bella has absolutely no life outside Edward, nor is she allowed to have one. He spies on her, never leaves her side and watches her sleep. These things seemed great and romantic at first, but on rereading them it just seemed incredibly creepy.
I can see that it is just a story, but I think it can be damaging for impressionable young girls, which is not a good thing since it really sort of idolizes abusive relationships. I didn't hate the books and they have some sentimental value, which is why I rated it two stars out of 5. But these days I simply prefer more realistic, grown up and healthier books.

Out of all the books I liked book number 3 the most and I really didn't like book 4. The entire book - which is far too thick - is about working towards a battle - that never actually happens. Which kind of makes the entire series end as a dudd.

So as I used to love it myself, I can understand why others do. I think I've mostly outgrown it and can't overlook the horrible writing anymore.
@critter
Reviewed: 2018-07-18
What's the big deal? I gave the Twilight series a chance, and I actually managed to get all the way through this one. Took me a while though. As near as I can guess, this is an adolescent fantasy of Stephanie Meyer, who has always wanted to be swept off her feet by a gorgeous, white-skinned vampire who drives fast and glows. Well, who hasn't. Besides me, anyway. I guess there's werewolves that enter the story somewhere, but I'm not inclined to read any farther. I got fifty pages into the second book before I laid it down, figuring life was too short to waste time on such stuff. If I want a masturbatory fantasy, I'll write my own, thank you.
@starclan50
Reviewed: 2018-06-28
A kind of mehhh classic. I like all the Cullen’s but Edward.
@kateminasian
Reviewed: 2018-03-07
This book was much better than I expected. I mainly read it to see what all the fuss was about but I truly enjoyed it. It was romantic and suspenseful all at once. Nothing deep to say about it, but it was a quick, fun read.
@ihs
Reviewed: 2016-08-26

Twilight is proof that a thousand poop throwing monkeys can be put in front of computers and some sort of story will show up. Not a good one, not a well written one, not one that has merit to be used to clean up said monkey poop. But it's a story. What's even worse is this series also shows that people are idiots and will buy whatever the king monkey says. I am convinced that this author took a 7 year old fan fic about a dog and tried to do something with it. If rather read the original fan fiction. This author should be drawn and quartered In front of any library to appease the gods of the written word or to end her suffering. Your reason is your reason. I want to kick Myers in the teeth.

@rosemaryknits
Reviewed: 2015-10-31
You know how a book is nearly always better than the movie? Well, I just finished this book, and GAWD, the movie would have to be better. OK, so the book is OK, it's the writing which made me want to poke my knitting needles into my eyes. Honestly, one line in the book - at some point, a character, "groans in horror." How does one groan in horror? This makes no sense. Later on, a tear trickles "noiselessly down her cheek." In all my 49 years of existence, I've never known a tear to trickle in any other way. It is worth pointing out that tears make no noise as they trickle down cheeks? Puhleeze! I could go on and on, but I won't. Modern Publishing Houses - PLEASE, I beg of you - shell out a few bucks for an editor!

The author takes great pains to describe what Bella has for breakfast every morning, and I was left thinking that I should pay attention, as this will have some meaning later on. It doesn't. The author takes great pains describing every character's hair texture and color and, once again, due to the repetition of this, I thought that there was some hidden meaning. If there is a meaning, it's extremely well hidden, because this information doesn't seem to have any real purpose.

This would have been an excellent graphic novel - at least I wouldn't have been tortured by the inane dialogue tags ("Yes," she gulped. GULPED? AAAAAARRRRGGGHHHHHH spare me!!!!) Imagine what fun an artist would have with this book! The whole "chase scene" would have made more sense in the graphic novel format, rather than a supposedly "realistic" presentation. The chase scene was really contrived and a huge stretch. It was dumb. At least the reader would have been spared the whole dialogue tag business, and he would be spared about 5000 adverbs, for which he would be thankful.

I bet that in the hands of the right director, it would make an excellent movie. My family all traipsed out to see it the other day and they reported that it is, actually, a very good movie. So, you see, the book isn't ALWAYS better than the movie.

There is something very nice about this book, however. It's printed with lots of space between the lines, and nice, wide margins. I read it in just a few hours. Some books take me weeks to read. Books printed in this nice, airy layout are *very* easy on the eyes.

Off to re-read, after 30 years, Interview With the Vampire, because I really do love a good vampire novel.
@andygirlkaraoke
Reviewed: 2015-10-13

While I completely understand the fascination with this book, I am so happy that I didn't choose to read rubbish of this nature when I was an angsty teenager. I did not like any of the characters, and the message about love that it sends is no healthy for preteen and teenaged girls.