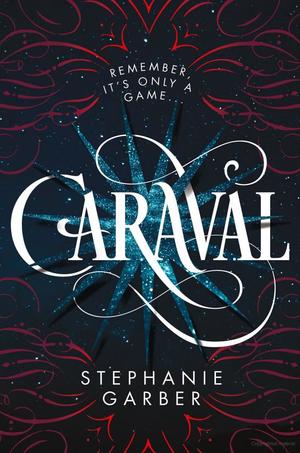 Stephanie Garber
Whatever you've heard about Caraval, it doesn't compare to the reality. It's more than just a game or a performance. It's the closest you'll ever find to magic in this world . . . Welcome, welcome to Caraval—Stephanie Garber’s sweeping tale of two sisters who escape their ruthless father when they enter the dangerous intrigue of a legendary game. Scarlett has never left the tiny island where she and her beloved sister, Tella, live with their powerful, and cruel, father. Now Scarlett’s father has arranged a marriage for her, and Scarlett thinks her dreams of seeing Caraval, the far-away, once-a-year performance where the audience participates in the show, are over. But this year, Scarlett’s long-dreamt of invitation finally arrives. With the help of a mysterious sailor, Tella whisks Scarlett away to the show. Only, as soon as they arrive, Tella is kidnapped by Caraval’s mastermind organizer, Legend. It turns out that this season’s Caraval revolves around Tella, and whoever finds her first is the winner. Scarlett has been told that everything that happens during Caraval is only an elaborate performance. But she nevertheless becomes enmeshed in a game of love, heartbreak, and magic with the other players in the game. And whether Caraval is real or not, she must find Tella before the five nights of the game are over, a dangerous domino effect of consequences is set off, and her sister disappears forever. “Spellbinding.” —US Weekly “A magnificent debut.” —Publishers Weekly, starred review “I lost myself in this world.” —Sabaa Tahir, author of An Ember in the Ashes “Beautifully written.” —Renée Ahdieh, author of The Wrath and the Dawn “Shimmers with magic.” —Marie Rutkoski, author of The Winner’s Curse “Darkly enchanting.” —Kiersten White, author of And I Darken “Decadent.” —Roshani Chokshi, author of The Star-Touched Queen “Like stepping into a living dream.” —Stacey Lee, author of Outrun the Moon “Destined to capture imaginations.” —Kirkus Reviews “Ideal for fans of The Night Circus, Stardust, and The Hunger Games.” —SLJ