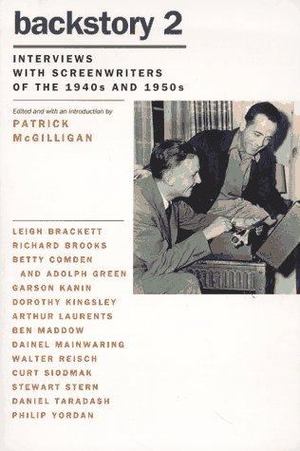 Patrick McGilligan
"Backstory" is the screenwriter's term for what happens in a plot before the screen story begins. In this companion volume to McGilligan's widely praised Backstory: Interviews with Screenwriters of Hollywood's Golden Age, fourteen studio scribes active in later decades rail and reminisce about their fifty-plus years of inventing and scripting movies. Richard Brooks, Garson Kanin and Ruth Gordon, Arthur Laurents, Ben Maddow, Stewart Stern, Daniel Taradash, and Philip Yordan are among the distinguished figures included. The 1940s were a period of transition for the motion picture industry, from an era of hope and glory and the upheavals of World War II to a postwar era of caution and confusion. The 1950s brought a great decline in the number of films produced and led to the extinction of that peculiar creature, the contract writer. The survivors of Hollywood's most productive years remain wonderfully talkative, however. In this lively collection of interviews they contribute useful writing tips, radical correctives to screen history and industry folklore, and just plain fascinating gossip. As a whole, the interviews provide a compelling biographical close-up of an entire generation of men and women whose talent, vision, and tenacity were critical to the institution we know as "Hollywood."